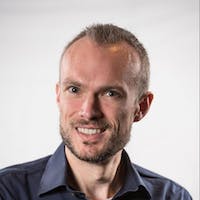 Subscribe to my newsletter and never miss my upcoming articles

In a service provider network architecture, most rely on one set of elements to tie an entire autonomous system together. In many networks, they aren't given a lot of thought. I'm talking about BGP route reflectors, of course.

Using meshrr, route reflectors are dynamically discovered between each other to form RR meshes and hierarchies thereof. If a route reflector stops behaving as expected, it can simply be deleted, a new one will be initialized in its place, and other route reflectors will automatically discover that it has been replaced and initiate a peering with the new one. RR clients in a physical network can reach outward-facing RRs via specific IPs or via anycast IPs applied to the RR's hosts.

Boundaries between different meshrr groups become policy control points, establishing points at which routing information exchange can be minimized and inter-group adjustments can be put in place for attributes or filtering.

Too often, when talking about the BGP full mesh scaling problems, we engineers quickly jump to the conclusion, "Just use a couple route reflectors." They're simple. They're standard. They do everything you need.

But what about when they don't?

Trying to solve all these challenges and address the drawbacks of all of the potential solutions would generally lead down the road of using HRRs. This can potentially be even more costly than simply deploying additional route reflectors in the same cluster for scale, as it requires additional routers for both scale and for policy. Fortunately, we now have the capability to run routing daemons, and route reflectors, in containers. Furthermore, we can deploy, upgrade, healthcheck, and restore - all with Kubernetes.

Disclaimer: My background is in traditional hardware-based networks. I speak BGP, MPLS, IS-IS, OSPF, etc. Kubernetes, and especially the notion of using it as the glue for a BGP AS, is a huge paradigm shift. That being said, the more that I work with Kubernetes, the more I realize that certain VNFs, like RRs, could be ideal applications of the technology. Kubernetes can manage all of horizontal scaling, health checks, remediation, and backend networking.

First, we must build our own container image based on the cRPD image. This enables us to install additional packages via apt-get (cron, python3), add necessary scripts, and create a default Jinja2 configuration template at /root/juniper.conf.j2.

Deployments are used for RR groups that scale to a certain number of replicas. This is generally appropriate for groups of RRs that have no clients outside the Kubernetes cluster.

DaemonSets are used for RR groups that need to be guaranteed to be deployed to a set of nodes. This is generally appropriate for groups of RRs that are serving clients outside the Kubernetes cluster.

Services index either Deployments or DaemonSets and are used to discover other RRs' IP addresses to establish peerings inside the cluster.

ConfigMaps are used to overwrite the default Jinja2 configuration template at /root/juniper.conf.j2.

Secrets are used to store secret data to be either mounted as volumes or mapped to environment variables. This includes the junos_sfnt.lic cRPD license file in the example deployment, though other licensing mechanisms are available.

There are only three scripts required for this project in its base form.

The examples/2regions-hrr directory of the GitHub project includes Kubernetes .yaml files and .j2 files for this example. 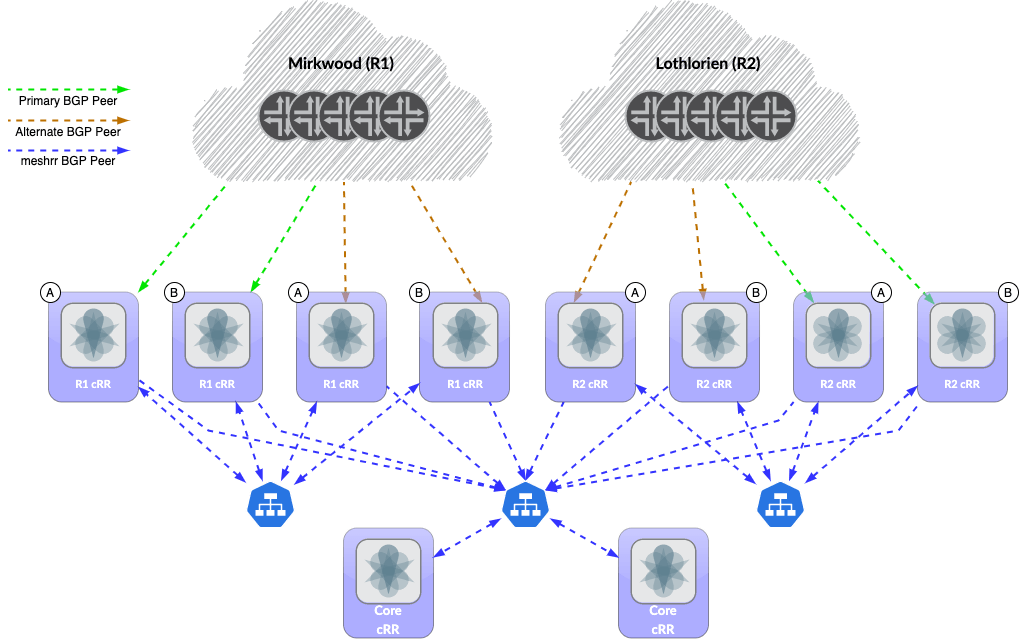 Assume there are two nations - Mirkwood and Lothlorien - serviced by one ISP. The ISP wants to ensure that routes with the community tag 65000:101 are not advertised outside of the nation in which they originate, and that routes with the community tag 65000:102 have a low local preference (20) outside of the region in which they originate.